For the past year, Sprint has commented a lot about its coming "Next Generation Network" deployment that aims to improve greatly Sprint's network capacity and coverage. Much of that speculation has been over how Sprint intends to feed backhaul to the "tens of thousands" of small cells it plans to deploy -- given Sprint's past history on getting backhaul delivered to its own macro cell sites as part of Network Vision.

Last summer, Sprint began talking up its "treasure trove" of 2.5 GHz spectrum as wireless backhaul for its small cells. Many speculated on exactly how this would be done -- with some online netizens theorizing Sprint actually would use part of its 2.5 GHz spectrum in a setup like microwave backhaul.

So, how exactly is Sprint going to use its 2.5 GHz spectrum as backhaul? The answer is a simple yet not often spoken about LTE Advanced technology:

Over the past half a year, S4GRU staff repeatedly were told by Sprint employees that 2.5 GHz was going to be used as wireless backhaul. But there was not a lot of explanation on the technical side on how Sprint would accomplish that. That is until we discovered exactly what it was on a document sent to us almost a year ago that described several then ongoing projects being tested internally by Sprint.

LTE UE Relay is a fairly recent technology introduced in 3GPP Release 10. Courtesy of a Nokia Siemens Networks white paper on the topic of LTE Relay, the following is a well made depiction of a network utilizing relay nodes in action. 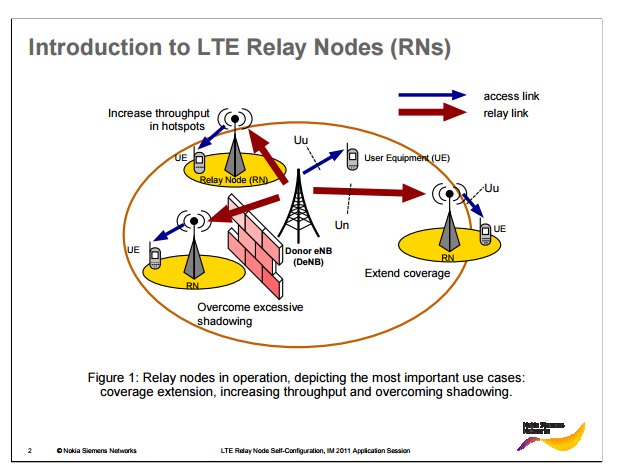 So, how does LTE UE Relay work?

A way to think of a Relay Node or LTE UE Relay (i.e. a small cell using 2.5 GHz as backhaul) is as a cell repeater. Yet, there is a significant difference in how a relay node and a repeater operate. Whereas a repeater increases coverage simply by amplifying a specific frequency range -- including all accompanying noise and interference -- a relay node demodulates and remodulates the signal, then transmits its own signal.

To put it in simple terms, one can think of a relay node being something akin to a Wi-Fi hotspot utilizing the LTE network for its data connection-- except in this case, the relay node is not transmitting a Wi-Fi signal but an LTE signal.

Thus, wherever there is even a speck of Band 41 coverage available, Sprint can plop down a relay node and use the existing LTE signal as backhaul for a small cell unit to increase local area coverage and capacity. This is because the small cell unit transmits a crisp, clean, new LTE signal in the area it is designed to cover, and UEs in that area would connect to this stronger signal.

As per the above image, an LTE Relay setup is quick to deploy and provides both an immediate impact on the local network and increased coverage/capacity for all compatible UEs in its coverage area -- without the need to wait for traditional backhaul, which could takes many weeks or months and be dependent on variables outside of Sprint's control.

But what about downsides of using LTE UE Relay as a backhaul setup?

Another potential issue is that a relay node may expand coverage into a hugely populated area with high load demands and by itself congest the LTE carrier that is providing the backhaul connection to the site. Even though the LTE carrier from the donor site could be running well at 20-30 Mbps speeds originally, the extra loading from the relay node could be just enough to congest that entire sector. In such a case, using a relay may be problematic, and it might be better instead to utilize more traditional backhaul like fiber, Ethernet, or microwave.

So, what is the point of writing all that?

Recently, an attentive S4GRU member discovered a post on LinkedIn, and an attached image caught the attention of S4GRU staff. 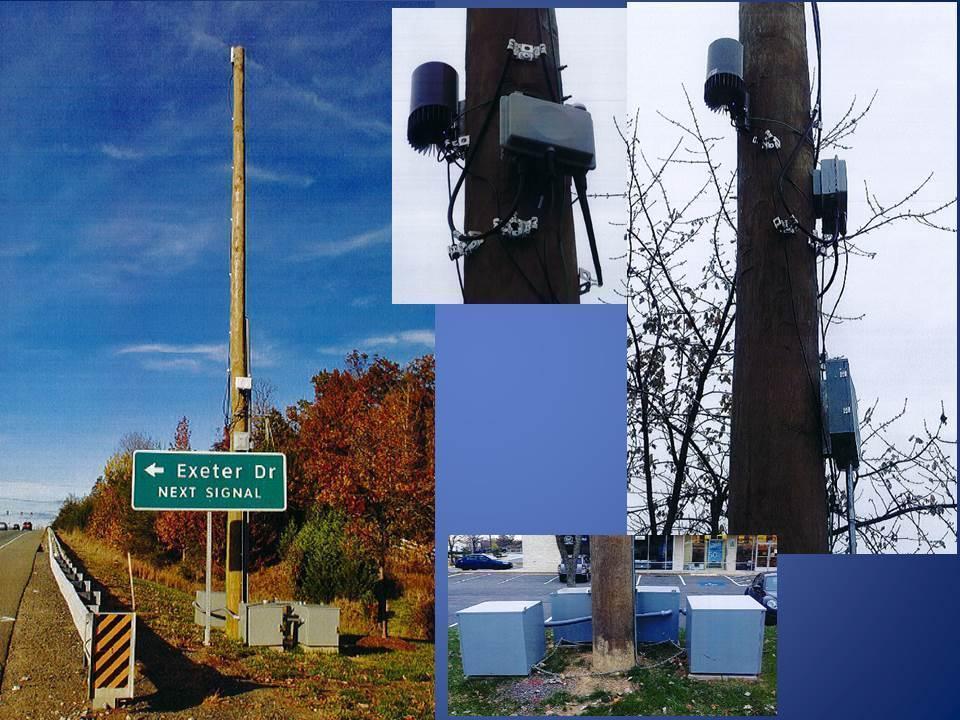 It is not that it is a small cell setup that caught our eye but that subsequent comments noted there were no fiber connections at all, it utilizes a Nokia Flexi Zone pico cell, and it resides in the Boston, MA region.

Among the major operators in the US, there are only two users of Nokia Networks equipment: Sprint and T-Mobile.

T-Mobile only recently has commenced talk about deploying small cells of such type. To deploy a small cell without traditional fiber backhaul while utilzing a relay antenna and not even talk about it would be a departure for T-Mobile, which is known for issuing many press releases on new LTE Advanced technologies being implemented on its network. Furthermore, the Northeast is an Ericsson vendor region for T-Mobile. Nokia has no business doing anything there, leaving the other potential user as Sprint.

There was some speculation on why Nokia would be deploying their LTE Band 41 small cell equipment in an Alcatel-Lucent vendor region -- considering Alcatel-Lucent and its partner AirSpan have their own Band 41 equipment designs. But Sprint has said that the deployment would be unconventional and utilize non traditional methods of deployment, so this must have been part of that strategy. Nokia Networks also is in the process of acquiring Alcatel-Lucent. That may be a factor but is a topic for another day.

[Edit: Nokia has completed their purchase of Alcatel-Lucent so mystery solved.]

What was discovered is that Mobilitie has been applying for permits to deploy wooden poles in Salem, MA and presumably other cities as part of the Next Generation Network small cell densification project. The ever watchful eyes of an S4GRU Ohio based sponsor group member base quickly went to work and discovered an application by Mobilitie that gives a full rundown of what exactly the company seeks to install. 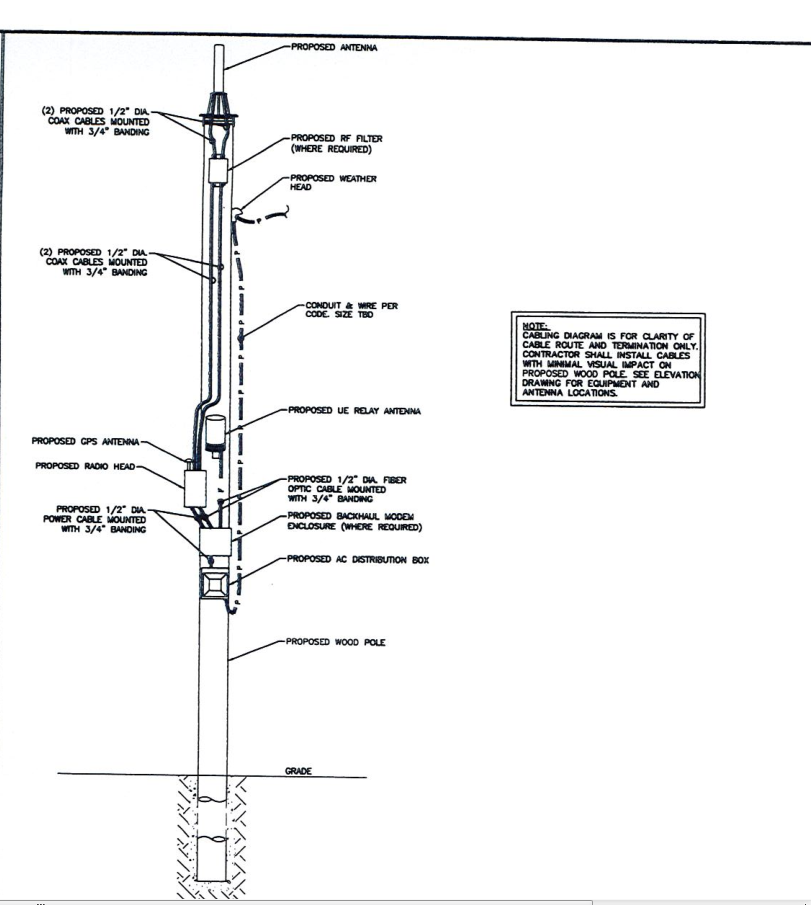 Note the permit application engineering details and the pictures from the LinkedIn post.

In addition to the near exact matching of details from the proposed setup in the filing and the pictures in the LinkedIn post, the application by Mobilitie, which is widely rumored to be Sprint's primary small cell deployment partner, also provided a site cascade ID: BS90XS933.

As per S4GRU sponsor maps detailing nearly all of Sprint's macro sites across the nation, here are a few examples of Sprint macro cell cascade IDs in the Boston market: BS03XC063, BS23XC461, BS60XC325.

Gee whiz! I wonder for whom Mobilitie could be deploying these wooden poles and smell cell setups.

Here is the LinkedIn image labeled according to details found in the application by Mobilitie. 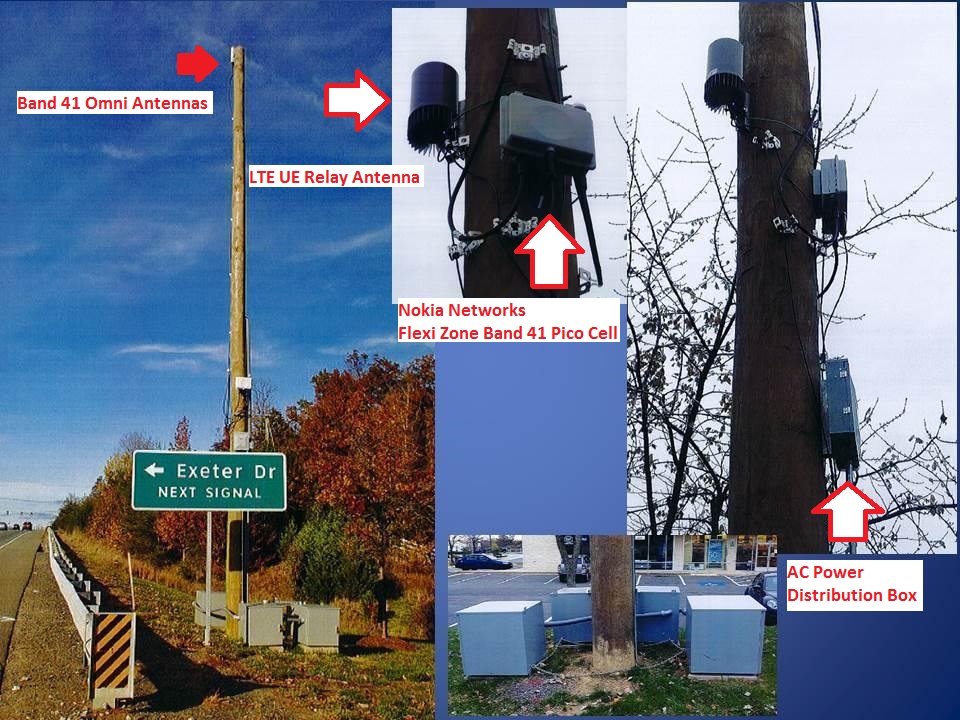 As with everything Sprint does, this relay technology is not one magical fix it all for Sprint's network. Sprint has much to do to continue to improve its network and brand image.

LTE UE Relay is a very new technology not without its cons. Yet, it is an interesting direction Sprint is going with regards to backhaul to the projected tens of thousands of small cells deployed as part of the Next Generation Network.

Of course, what is more important than the theoretical talk is the discovery above of practical setup and engineering documentation. There is solid proof now that Sprint has started at least one portion of the long awaited and much talked about Next Generation Network deployment.

So, keep an eye out for such local permit applications by Mobilitie and potentially other unnamed partners, and observe your surrounding environments. One or more such small cell setups just may pop up near you without warning soon...