Call it a comeback. The band, the PCS band is getting back together. Pun intended. You will understand soon.

After a two year absence, the popular one, two, three part "What's the frequency, Kenneth?" article series is back for an encore. For full comprehension, refer back to those articles -- and others linked throughout this article. We will lead you in the direction of learning. No worries.

But now with a lead writer duo and a change in artistic direction, the topic of this article has shifted from engineering screens to band 25 expanded bandwidth primary carriers. The frequency focus, though, remains the same.

Perhaps also long overdue, Sprint finally has entered the spectrum alignment game of musical chairs that VZW, AT&T, and T-Mobile have been playing for a while in the AWS-1 and PCS bands. In this case, Sprint and AT&T are the dance partners. More on that after some PCS band background.

The PCS 1900 MHz spectrum alphabet is not quite what might be expected to the uninitiated. Sequentially, the band runs A, D, B, E, F, C, G. Without delving too much into the 25 year old history and politics of the band, that alphabet is a product of block sizes -- PCS A/B/C blocks are 30 MHz (15 MHz FDD), PCS D/E/F blocks are 10 MHz (5 MHz FDD) -- and spectrum caps at the time of FCC auctions in the 1990s that allowed licensees to obtain up to 45 MHz of total spectrum in urban markets, 55 MHz of total spectrum in rural markets. The spectrum cap, by the way, is long gone, replaced with a spectrum screen by a free market frenzy FCC administration over a decade ago.

For the time being, set aside the PCS G block, which is 10 MHz (5 MHz FDD). It was created much later, never auctioned. Rather, it was compensatory to Nextel for spectrum losses incurred in rebanding Public Safety SMR 800 MHz. Sprint now holds all PCS G block licenses nationwide.

Along the same lines, a new entrant into a market could acquire one PCS A/B/C block license and one PCS D/E/F block license for 40 MHz of total spectrum that could be contiguous within the convoluted A, D, B, E, F, C, G alphabet. That possibility, though, did not come to pass much at FCC auction 20 years ago. Spectrum contiguity was not all that important for GSM, IS-136 TDMA, and cdmaOne/CDMA2000, not even so much for W-CDMA. But with LTE, circumstances have changed.

That is a lot of abstract information. To put a face to the name, see a visual representation of the entire PCS band plan, followed by three exploded views of just the adjacent PCS C and G blocks: The first of the three exploded views above shows the intact PCS C 30 MHz (15 MHz FDD) block -- this is relatively rare among licenses. Long story somewhat short, most PCS C block licenses had to be auctioned by the FCC multiple times, as many original Designated Entity entrepreneur/minority class winners found that they ultimately could not afford their licenses and construct networks. A quote from a previous S4GRU article:

That brings us to the second interesting point of spectrum provenance. And this part will certainly veer into editorial content. In FCC auctions, a DE is a small business or minority/woman controlled business that qualifies for bidding discounts. Additionally, the PCS C and F blocks typically were reserved or positioned for DEs. The idea was to increase diversity in the wireless industry. The predecessors of both T-Mobile and AT&T -- through the notorious likes of Cook Inlet PCS, Salmon PCS, et al. -- garnered many of their PCS licenses by way of DEs. Just this year, though, the FCC officially shot down Dish for its use of several DE bidders in the recent AWS-3 auction. No discount for Dish!

So, for reauction, most PCS C block licenses were disaggregated into smaller, easier to afford blocks. Note the PCS C1/C2 15 MHz (7.5 MHz FDD) blocks and PCS C3/C4/C5 10 MHz (5 MHz FDD) blocks in the second and third exploded views of the PCS C and G blocks.

That whole PCS C block medley will come into play up next. Just be sure to note in the band plan diagrams the spectrum contiguity of the PCS C + PCS G, PCS C1 + PCS G, or PCS C5 + PCS G block combinations.

A few weeks back, S4GRU received whispered word and saw PRL change indications that Sprint internally was discussing and prepping for spectrum swaps, whereby Sprint would trade some less strategic PCS holdings in return for PCS C block spectrum that is contiguous with its PCS G block. This type of deal would grant Sprint contiguous PCS holdings to expand LTE from a 5 MHz FDD carrier to a 10 MHz FDD carrier -- or even beyond to a 15-20 MHz FDD carrier in the future when CDMA2000 is significantly pruned or decommissioned.

For a visual depiction of one previous example of LTE in the PCS G block expanded into the contiguous PCS C block, thus going from 5 MHz FDD to 10 MHz FDD, see a graphic of what already has happened with earlier, unrelated spectrum transactions in Columbus, OH: Compare to the exploded views earlier in this article of the PCS C and G blocks. And read our Columbus 10 MHz FDD discovery article for further background.

Then, for those aforementioned spectrum rearrangement rumors to come to fruition, we did not have to wait long at all. In what may be the first of many such spectrum deals, Sprint and AT&T filed with the FCC last week applications to swap PCS spectrum in several Basic Trading Area (BTA) markets:

By this and other contemporaneously filed Form 603 assignment applications, affiliates of AT&T Inc. (“AT&T”) and affiliates of Sprint Corporation (“Sprint”) (collectively, “Parties” or “Applicants”) seek the Commission’s consent for simultaneous assignments of certain PCS licenses. The assignments are license exchanges or swaps that will enable more efficient operations by creating larger blocks of contiguous spectrum. 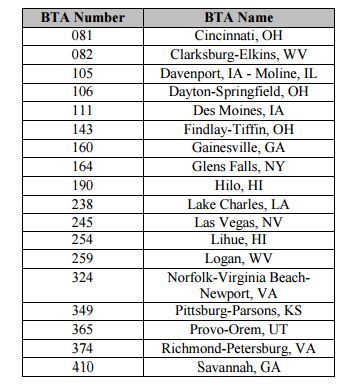 The spectrum being assigned in this transaction will occur as exchanges of spectrum within the same BTA. The AT&T Licensees and Sprint Licensees will assign PCS spectrum to each other in intra-market exchanges, which will allow these Parties to enjoy the efficiency benefits associated with larger blocks of contiguous spectrum. Operating on contiguous blocks of spectrum allows the carriers to use the guard band in the adjacent spectrum blocks, providing greater capacity.

In summary, both Sprint and AT&T make out pretty well in this deal. Both parties will be able to improve their respective PCS spectrum contiguity. It is a quid pro quo.

All spectrum Sprint acquires will be PCS C block, while all spectrum AT&T acquires in exchange will be PCS A, B, D, or F block. The important takeaways are that Sprint will be able to expand LTE from the PCS G block into the PCS C block for a 10-15 MHz FDD carrier -- but that Sprint will have to eliminate or relocate CDMA2000 operations in the aforementioned blocks shipped off to AT&T.

The FCC approval of these applications is in zero doubt. It will be a rubber stamp. All transfers are relatively even spectrum swaps and in the public interest. But carrier reconfiguration will not happen right away. Sprint and AT&T have set up spectrum leases for each other in the interim. For Sprint, it will have to pare down and/or relocate CDMA2000 carriers to the acquired PCS C block spectrum. That is the reason behind the PRL updates, which will aid CDMA2000 acquisition once any carriers change frequencies.

S4GRU loves to encourage engineering screen watching -- just as we have done in the previous "What's the frequency, Kenneth?" articles. The more you know. See the three articles linked at the beginning of this article.

Now, for those in markets listed in this transaction, watch for LTE EARFCNs to switch from 8665/26665 to 8640/26640. The latter is a clear sign of 10 MHz FDD. S4GRU tracks these in its EARFCN thread, which we update periodically. Additionally, original CDMA carrier channel assignments will vary considerably, but watch for any carriers in band class 1 to shift to the 900-1200 range.

Full disclosure, not all counties in the listed BTAs will be affected the same -- because of existing spectrum partitions and disaggregations. Those in outlying areas may not benefit, but all titular BTA cities will gain 20-40 MHz (10-20 MHz FDD) of contiguous PCS C block + PCS G block spectrum and should deploy at least 10 MHz FDD band 25 in the coming months.

With that said, Sprint finally gets back into the game of horse trading spectrum with a competitor -- instead of sitting on the sidelines watching the others do these deals to their own benefit all the time. T-Mobile defines its band 4 "wideband" LTE as 15-20 MHz FDD. Sprint already has plenty of band 41 at 20 MHz TDD, more and more everyday with the WiMAX shutdown. But soon, Sprint also may have "wideband" LTE in band 25. We shall see. Expect to hear it here first.

S4GRU had the heads up on previous 10 MHz FDD possibilities already four years ago -- exactly four years to the date of the Sprint-AT&T spectrum transfer applications at the FCC last week. Coincidence?

For a more detailed look at the pluses and minuses of the spectrum swaps in the noted markets, see our S4GRU spreadsheet.